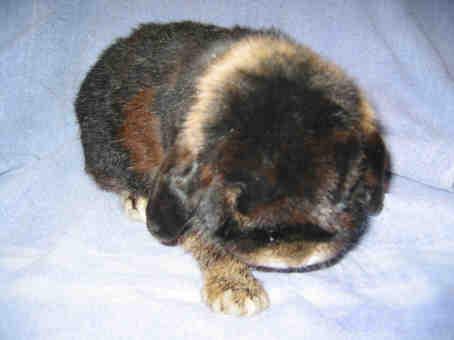 In October, the Rabbit Haven received an alarming notice from a local shelter that 14 rabbits were slated to be euthanised! We had very little notice. The shelter was crushed with abandoned rabbits and several with any little issue or even simply ones that did not "seem" as adoptable were going to be put to sleep. The shelter was desperate. The shelter manager, who works tirelessly to help all she cares for, was begging Auntie Heather to help! The Haven immediately started looking for a place for the endangered bunnies.

Heather posted everyone she could think of including her friends on a disabled rabbit mailing list. One sweet person, a rabbit savvy person named Beth, responded almost immediately! She said "if you can find a way to transport him, I will take the 'sun bleached Holland lop'. I am in Georgia." It was just meant to be!

Not to be put off by distance, Auntie Heather went to work to take care of details and reference checks, then TRANSPORT! Beth is indeed a remarkable bunny mom! The Haven was determined and so was she. What a loving person. (Lucky bunny!) Beth already had several bunnies yet she made room for one more special boy, Molokai.

It did take a bit of doing, but one of our friends, our CPA, just happened to be traveling to Atlanta! Steve took Kai with him to Atlanta. Here is Steve's recollection of the trip from California to Atlanta:

I was going to Atlanta on business, so Heather of Rabbit Haven asked if I could take a bunny with me to his new home there. I was more than happy to oblige. Heather knows I travel, so she checks with me often to see where I might be headed and if an adoption might be facilitated. This time it worked out perfectly!!! I was pleased to help.

I contacted my airline, and made a reservation for the rabbit. It was very easy to do. I needed to get to the airport a little early to sign him in and let them measure the carrier to be certain it would fit under the seat, and pay a $50 transport fee. It took about 3/4 hour to wait in line and complete this process, during which time several people asked what was in the carrier. Everyone seemed surprised and pleased I was transporting a rabbit. They were charmed.

Once everything was in order, I had the task of going through security. The current security requirements mandated that his water bottle be empty, but luckily there was a fountain after the checkpoint. Security required that I hold the rabbit and put the carrier through the x-ray machine. Of course, most of the agents wanted to look at Molakai, as did the flight attendants. They were thrilled to see a rabbit!

Once on the plane, I discovered that I had lucked out and no one was sitting in the middle seat so Molakai was able to ride first class. Plenty of Play room. He spent most of the trip visiting and exploring and then making a retreat to his carrier for refreshments. The attendant asked if he wanted veggies --YES!!!!

The flight staff was very professional, but she told me in a way that let me know that yes, the rabbit could indeed come out of his carrier mid flight - she would look the other way if I was discreet. So, he was free to play!!!! Much to the delight of the other passengers. Of course our boy enjoyed his flight and was exceptionally calm and naturally sweet. He is a most curious boy and a great travel companion! 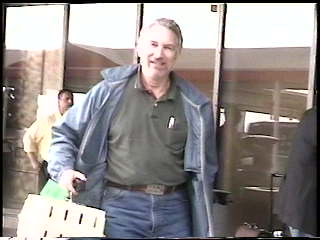 Once I arrived in Atlanta, I met with Beth, his new adoptive mom, where the transfer was made. I was in cell phone contact with Beth all the way. Everyone was so excited!!!! As soon as I arrived, the new bunny mom was right there at the gate! Yes, she took pictures!!!! Darn, her camera jammed, so we just have a few - What a happy family. Great people. Obviously loving and happy to have their new bunny boy home at last! I was thrilled to be a part of this wonderful adoption. I have to admit I felt pretty good to have been a part of getting the little fellow home. It was fun! 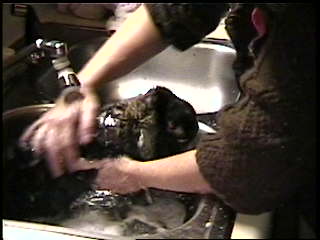 Beth was not sure what Kai might have been exposed to before she got him, so she bundled him up and off he went to the vet. Kai got a bath, a checkup and some preventative treatments, and then he was ready to begin his new life.

Beth reports that Kai is a sweet, loving, cuddly boy. She hopes to bond him with her bunny Elvis. He was a scared, unloved and forgotten bunny a month ago, and now look at him! He is confident and so affectionate in such a different way. He snuggles all the time! 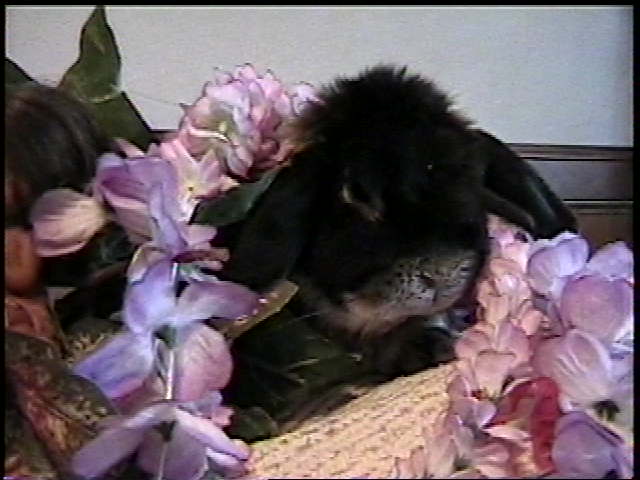 Beth said it best: "I am amazed at what a wonderful little bunny Kai is. He is by far the sweetest rabbit I have known in spite of his situation before me. I adore him and don't ever want to be without him."

What a lucky bunny - What a loving family. Thank you Steve and Beth! Love to Molokai! Thank you to the shelter manger who worked overtime to help us get him out!